Ambleside Action for a Future (AAFAF), established in late 2018, has been working hard on many fronts to achieve their ambition to get their community to net-zero carbon by 2030.

One of their sub-groups is the Warmer Homes group. Their focus is to help their neighbours to understand how they can reduce heat loss in their homes. This has multiple benefits – eliminating draughts and making homes more comfortable to live in, while also reducing energy usage, which saves both money and carbon emissions.

The group members collectively have a good level of knowledge about causes of home heat loss and what can be done about it. To supplement their knowledge, the Warmer Homes group has a very good relationship with CAfS, who can provide the next level of advice and support.

In 2020 the group started developing the idea of offering residents free thermal imaging surveys of their homes. A thermal camera can pick out colder spots on walls, ceilings and floors where heat is escaping to the outside. These surveys would be alongside simple tips around how to make improvements and advice about how to get further support from CAfS.

A quick survey of AAFAF’s 120 members showed that a considerable number (20 individuals) were interested in this kind of support. The next step was then to get a camera. AAFAF was successful in securing a total of £3,500 funding from South Lakeland District Council and Cumbria Community Foundation to buy a camera and associated training, which was later provided by CAfS.

The group hoped to undertake surveys in the winter of 2020/21, but unfortunately were prevented from doing so by Covid restrictions. Instead, they took the opportunity to have phone calls with the 20 AAFAF members who had expressed an interest. The purpose of the phone calls is for the surveyors to get some understanding of each property and any issues that the homeowner is concerned about. They take about 20 minutes and have become a standard part of the survey procedure

During September 2021 AAFAF engaged with the local community through a questionnaire and Climate Action Day to raise awareness about AAFAF’s many initiatives and to identify residents who wanted to get involved. As a result, an additional 20 people signed up for a home heat loss survey, and a further 7 have come forward since.

In November 2021, the group was finally able to start the surveys. By the end of the year they had held 28 phone consultations and carried out 15 surveys. They are aiming to complete surveys for all those who have expressed an interest and possibly more by the time warmer weather arrives about the end of March. (The surveys can only take place when the inside temperature is at least 10 degrees Centigrade higher than outside.)

Mike Green from the Warmer Homes Group explained what the surveys involved and some of their findings:

“The surveyor visits the property and conducts the survey from the inside, taking about 30-40 minutes. The thermal imaging camera measures the heat emitted by objects and shows it in a colour-coded way, so that the colder areas are shown in blue and the warmer ones in red. When used to survey a home, these kinds of problems are highlighted:

Here are some of the images from the surveys. Blue and green show colder areas, red and orange show warmer areas: 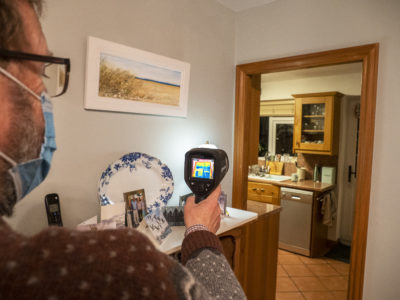 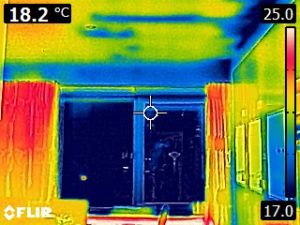 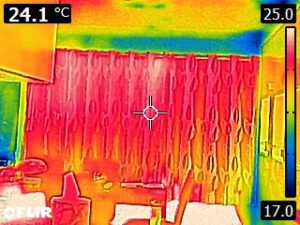 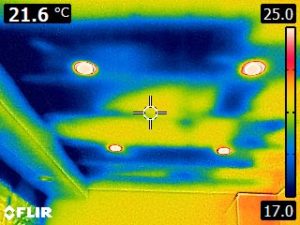 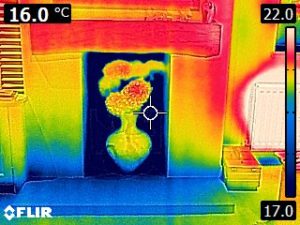 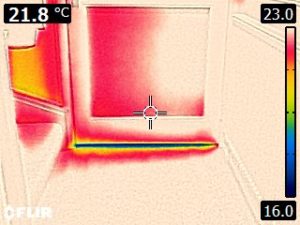 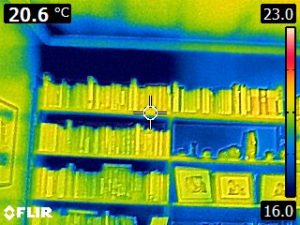 Some of these issues can be reduced quite simply. The effectiveness of drawing curtains can be demonstrated by the camera and in several houses the camera has suggested that loft insulation is thin or patchy. One owner emailed a few days after a survey to say:

“We took the Christmas decorations down from the loft this afternoon so I took the opportunity to have a quick look at some of the areas the imaging showed up and right enough, there were places where insulation was thin or missing.  A little DIY job to add to my list!”

The camera can highlight issues around draughts, which can often be quite cheaply rectified. More complex issues, such as cold walls or cold patches on walls, might be from slumped cavity wall insulation or the walls being solid stone. These issues require more investigation to determine the right course of action.”

Of those people who have engaged with the group, 10 have had further contact with CAfS for advice and several have taken action through simple DIY measures.

Comments about the surveys have been very positive, for example: “Many thanks for your trouble in doing this survey. There are some unexpected insights into where we lose heat, and we will definitely look at getting a Chimney Sheep.”

As the group continues to invite residents to take up to offer of a free survey, it is hoped that many more will take action.

Anyone living in the Ambleside area interested in having a heat loss survey can email [email protected] giving their address and a phone number and the Warmer Homes Group will contact you.

If you are part of a different community and are interested in setting up a similar project, please contact [email protected] and we will try to support you.

If you are interested in home energy advice from CAfS, please visit For your home – CAfS or contact the team on 01768 216500 or email  [email protected].